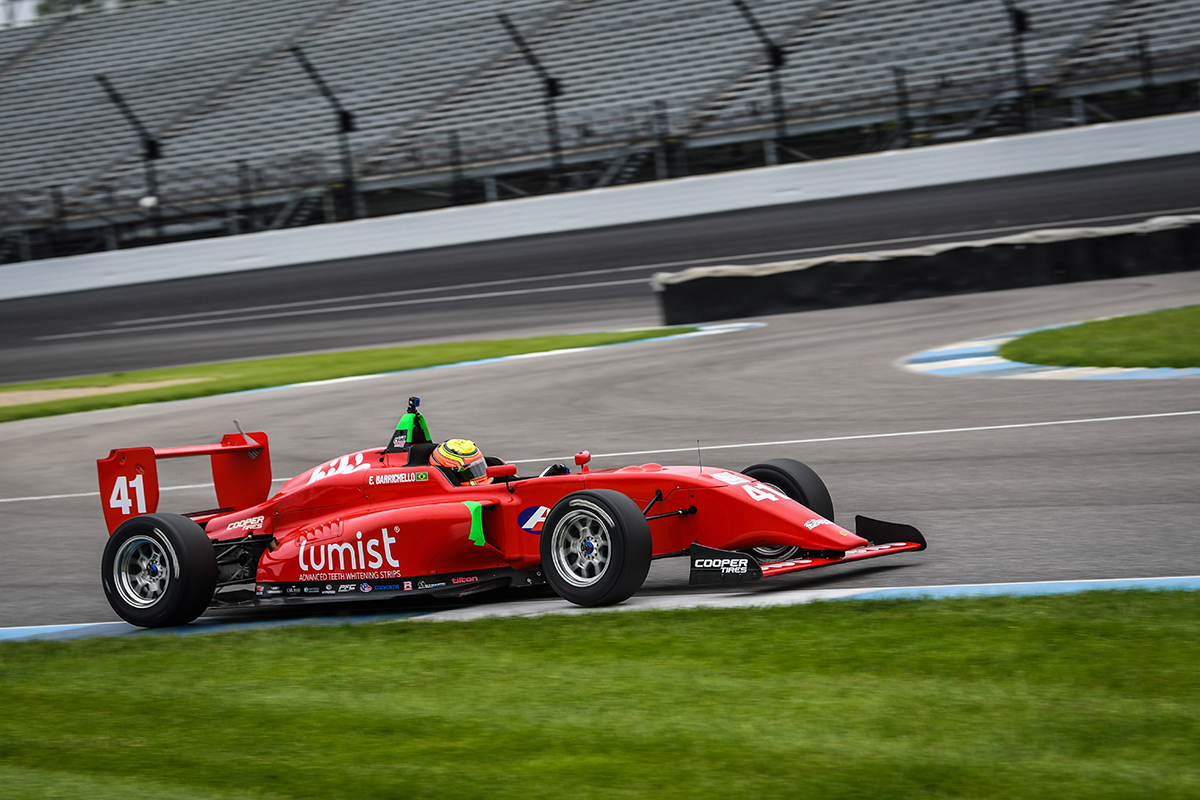 In only their second ever Cooper Tires USF2000 Championship event, Miller Vinatieri Motorsports secured their first top-five result. Taking on the Indianapolis Motor Speedway in the first of two races this month, both Jack William Miller and Eduardo Barrichello both ran inside the top-five with Barrichello bringing home the best result to date for the Indianapolis based program with an impressive fifth place finish.

While both the team and drivers worked through Thursday’s test session to get a grip on both wet and dry weather setups, the characteristics of the fast and flowing Indianapolis Motor Speedway road course, and how to effectively use the massive draft from the long front straightaway, Friday morning would bring two qualifying sessions to set the grids for race one and two on the weekend. With below average temperatures, drivers claimed their fastest laps deeper into the runs as tire temperature and grip increased as sessions wore on.

“Qualifying was ok, but not what we have hoped for,” explained Team Owner Jack Miller. “Both Eduardo and Jack claimed top-ten starting positions and while the speed is there to contend at the front of the field, we just need to be smarter on track and get the most out of each and every opportunity. The pace of our cars is good and I think we can move forward in both races this weekend.”

Starting ninth and 15th for round three of the 2019 season, Miller and Barrichello had rocket ship style starts closing the first lap in fourth and sixth respectively. Impressing the team’s Co-Owner and Indianapolis Colts kicker Adam Vinatieri, who was on site this weekend, and playing the start to perfection, the duo picked up multiple positions in turn one and throughout the remainder of the lap to quickly move forward. Holding station for the majority of the race, Barrichello and Miller sat fifth and sixth respectively until disaster would strike late in the race.

Entering turn seven, Miller was hit from behind and sent off the track and plummeting down the race order. Falling back to 19th, a late race caution bunched the field up for one more restart. Moving back forward and hunting for a top-ten result, contact was made on the final circuit, crippling Jack’s car and forcing him to the sidelines. Just one lap prior, Barrichello fell to the tail of the field as a gearbox issue did not allow him to downshift at the end of the long straight, and forcing him to the pit lane.

Back to the track on Saturday and hoping their luck had turned, it was Barrichello’s turn to start inside the top-ten in tenth while Miller was close behind in 11th. Another incredible opening lap by the duo saw them well inside the top-ten before multiple caution periods would set the tone for the race. Restart after restart, both second generation drivers jockeyed for more positions with Barrichello claiming the team’s best result. A late race incident for Miller eventually classified him in the 19th position, while Barrichello went on to make two passes on the final restart and solidify his fifth place result.

Miller added, “We will now shift our focus to the one and only oval event of the year. Testing today at the Lucas Oil Raceway, the goal is to carry the momentum into the May 23 and 24 event, our second home race of the season.”

Miller Vinatieri Motorsports would like to thank their long list of partners and team supporters. With two home races this month, more than 100 guests will attend the pair of Indianapolis area races as the team works to bring new eyes, and partners to the motorsports world.